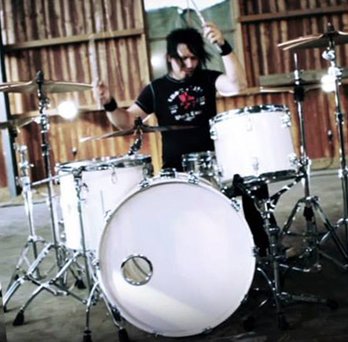 It was Peter Criss’ drum solo on KISS Alive that got me interested in drumming. I used to play air drums to it when I was about 4½ years old. I got my first drum at my 5th birthday. When I was 7 years old I bought my first drum kit.

In 1987 I started my first band, Injury. And in 1989 I was in my first real band, Abstraction. Abstraction did a bunch of gigs in our hometown Västerås. During the 90’s I had several different bands.

In 1995 I moved to Stockholm to study music at Rockmusikerlinjen (RML).

I had a few years of struggle before a friend of mine, Magnus Henriksson, introduced me to Erik Mårtensson. Erik and Magnus started the band Eclipse that would eventually have me on drums. I was hired to do the tour of their first album. And then I played on Eclipse’s second album, Second To None, as a permanent member. I was in Eclipse for six years, 2000-2006.

In 2005 I toured with Swedish band Sha-Boom, who had great success in the late 80’s/early 90’s. Some of the gigs included guest singers as Tommy Nilsson (ex- Easy Action), Nanne Grönvall and Anki Bagger.

In 2008 I did a world tour with Danish band Royal Hunt. We played all over Europe. After that we continued to Russia and Japan. We ended the tour at Sweden Rock Festival. The singer of Royal Hunt during this period was Mark Boals (Uli Jon Roth, ex- Yngwie Malmsteen). We also did some shows in Denmark opening for Alice Cooper and Deep Purple.

Later in 2008 I did one gig at Firefest, Nottingham, with Mitch Malloy. This gig was recorded for an official DVD release in 2009.

I joined metal band Lion’s Share for their summer tour in 2010.

Also in 2010 I returned to Firefest. This time to do a gig with legendary singer Jimi Jamison (Survivor). The Firefest gig was released as an official DVD and CD. We did a tour of Sweden in November 2010 and one gig in Austria. The band featured members of

In 2011 I joined Jamison again at Firefest. And in 2012 I played on his last CD, Never Too Late. The CD was recorded and produced by Erik Mårtensson of Eclipse.

I was a member of melodic rock/AOR band Grand Design between April 2013 and November 2015. I recorded one album with the band, Thrill Of The Night. Released in 2014. We also played at the Melodic Rock Fest 4 in Chicago, IL, USA.

In the autumn of 2014 I returned to Eclipse, but not as the drummer. This time I was asked to play bass. It was an easy choice to make since I like the songs and I believed in the band. Since then Eclipse have released the highly acclaimed albums Armageddonize and Monumentum with several tours that followed. We also did Melodifestivalen (the swedish part for Eurovision Song Contest). In September 2019 it was all over for me. We had different views on how to move the band forward, so I was asked to leave. The album Paradigm was to be my very last recording with Eclipse. Released October 11, 2019.

Between 2015-2018 I was the drummer for norwegian band Ammunition. The band is led by singer Åge Sten Nielsen (ex Wig Wam). I recorded one album with the band, simply called "Ammunition", and played several shows with them. In 2017 Ammunition ended up second in Melodi Grand Prix (the norwegian part for Eurovision Song Contest).

From 2006 to present I've played in a coverband, Rockbusters, from time to time. We continue doing gigs for some of Swedens biggest companys.

The year 2020 I will be involved in different projekts and bands. Johan Kihlberg's Impera is one of them. I will also make a return to Lion's Share for some shows. But, there is more to come...